History of the Club

Eglinton Classic Car Club was formed in 1995.
The club originally consisted of a group of 12 people that met together at a pub called the Happy Landing in Eglinton. As this was the only Car Club in the L’Derry area it quickly grew and attracted new members. 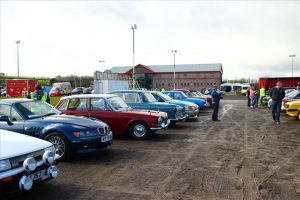 Over the past 21 years the club have selected a committee that have met regularly to organise various types of events. These events have ranged from a car run and a barbeque, to a large yearly event with many various attractions.
The purpose of these car runs and events is not only for the enjoyment of the club members or the public who come to see and hear these beautiful old vehicles. These events are also organised to raise funds for a different charity which the club members select each year.
The Eglinton Classic Club with the support of its many sponsors and the public have over the past 21 years raised a over £84,500 for charitable organisations.

The club usually meet on the 3rd Monday of every month at Eglinton Cricket Club.

There is a very friendly relaxed atmosphere at the club and much fun is had by all at the various events.
There are a wide range of vehicles belonging to members of the club which can be seen in the gallery section. Some of the vehicles are very rare such as the 1959 Frog Eye Sprite, then there are also many good examples of mini’s and escorts etc. There is even the odd military vehicle and old bus.
The club take new members throughout the year and the cost for a years membership is £15.